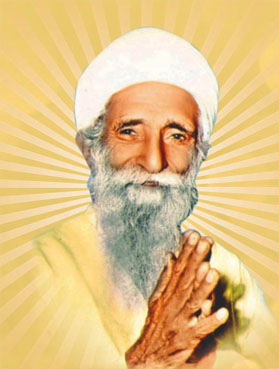 Noble souls are rarely born.One such noble and spiritual soul that enlightened and rejuvenated the city of Yamuna Nagar was Sriman 108 Sant Pandit Nischal Singh ji Maharaj .He was a great saint with benevolent feelings for the mankind. This quality of his led him to become the head of ‘SEWA PANTHI SECT’ which is always at the service of the mankind.

Sant ji was born on April 18, 1882 at Mittha Tiwana, district Sargodha in Pakistan to the noble parents Bhai Amir Singh Ji and Mata Pyar Kaur. He was brought up in Puran sikhism environment. He was just three when his father passed away. He was then brought up by his elder brother, Bhai Mehtab Singh Ji. Sant Ji got his education from Banaras and Kashi. He studied Sanskrit literature at Haridwar. He had special interest in the philosophy of Vedas.

After completing his education, he went back to his hometown Mittha Tiwana and decided to devote and dedicate his whole life in the service of mankind and the spread of education and Gurmat to eradicate the darkness of ignorance from every nook and corner of the society. Through his GURMAT PARCHAR he inspired many people to become a Sikh. The foundation stone of the present building of Gurdwara Patna Sahib in Bihar was laid by him only.

His contribution to the field of education is numerous and commendable. In 1952 he came to Yamuna Nagar and blessed the city with its pious and saintly touch. Here he started a grand Dera Santpura dedicated to the service of mankind. He had firm belief in the MEHAR of WAHEGURU because of which he was able to accomplish various impossible tasks of life. He also believed in the ideology of Practise before you preach and strictly followed it.

Under his leadership SEWA PANTH flourished immensely and worked in different fields to make the society strong and enlightened. He was made the head of the SEWA PANTH in 1950 in a grand religious gathering at the dera of Sant Amir Singh Ji . This gathering was attending by various saints and philosophers of SEWA PANTH.

He always wanted to open a public school in Yamuna Nagar for the spread of sikhism and education with distinction based on modern techniques. When the opening of the public school was being planned out he left for his heavenly abode on August 23, 1978. His dream was given the concrete shape by the Sant Nischal Singh Trust, headed by Dr. Waryam Singh Ji . To pay homage to this saintly soul the public school was named after him. Sant Nischal Singh Public School is the dream come true of Sant Ji Maharaj. Since then the school has been flourishing and reaching the zenith of success.

Sant Ji has always been a beacon and a light house to the lives of the people. His works and his personality shall always be cherished upon in the generations to come.